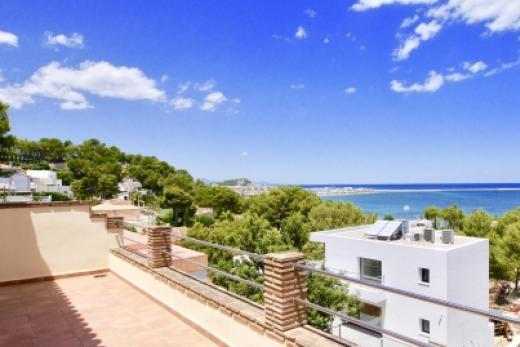 Ref. VI-09685
997.000€
View property
Photos of the property
Book a View
Information about the Agency

Beautiful villa on the Hill of San Nicolás, the most exclusive area of ​​Denia. With unbeatable views of the sea from any point of the house. It is located on a private and closed street for only two neighbors, which guarantees total privacy and security. On a plot of 766 m², the construction of the house occupies an area of ​​409 m², which is divided into two floors. There is space for several cars at the entrance and a pergola, plus a closed garage that communicates with the interior of the house, and could well be transformed into a guest house or room for service, since it gives access to the kitchen and a laundry room, with facilities to put another bathroom. From the entrance of the house you can already contemplate the sea views. House is built in the best qualities, and has an open design, with large windows. On the ground floor there is a large bedroom with bathroom en suite, living room, dining room and kitchen, all with access to the large front terrace and swimming pool. high is open on an interior balcony that gives access to the two bedrooms, the main one with dressing room, a large bathroom with hydromassage and a terrace of 15m2 with frontal views to the sea.The second bedroom has another terrace, bathroom or own and a balcony overlooking the sea.The front of the house, with covered terrace, swimming pool, summer kitchen and shower is the most impressive part of the house, with its vacuum pool, landscaped areas and beautiful views. house has all the amenities, and facilities. Propane gas heating, air conditioning, PVC enclosures and security with mosquito nets, alarm .... 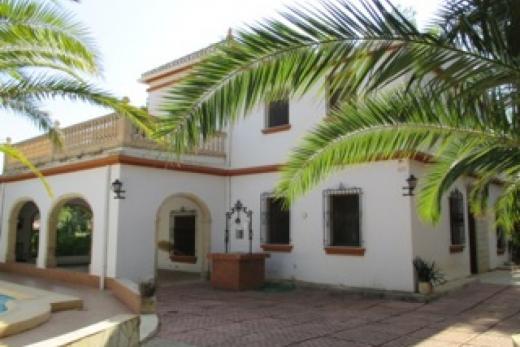 Wonderful property with a lot of privacy with a Mediterranean plot of 2245 m² with a total living area of ​​253 m² plus terraces. Residential area very upscale with a lot of distance to neighbors. Property and land and surroundings, can best be evaluated, if you contact us and visit them together. All in all - and all at a very attractive price. 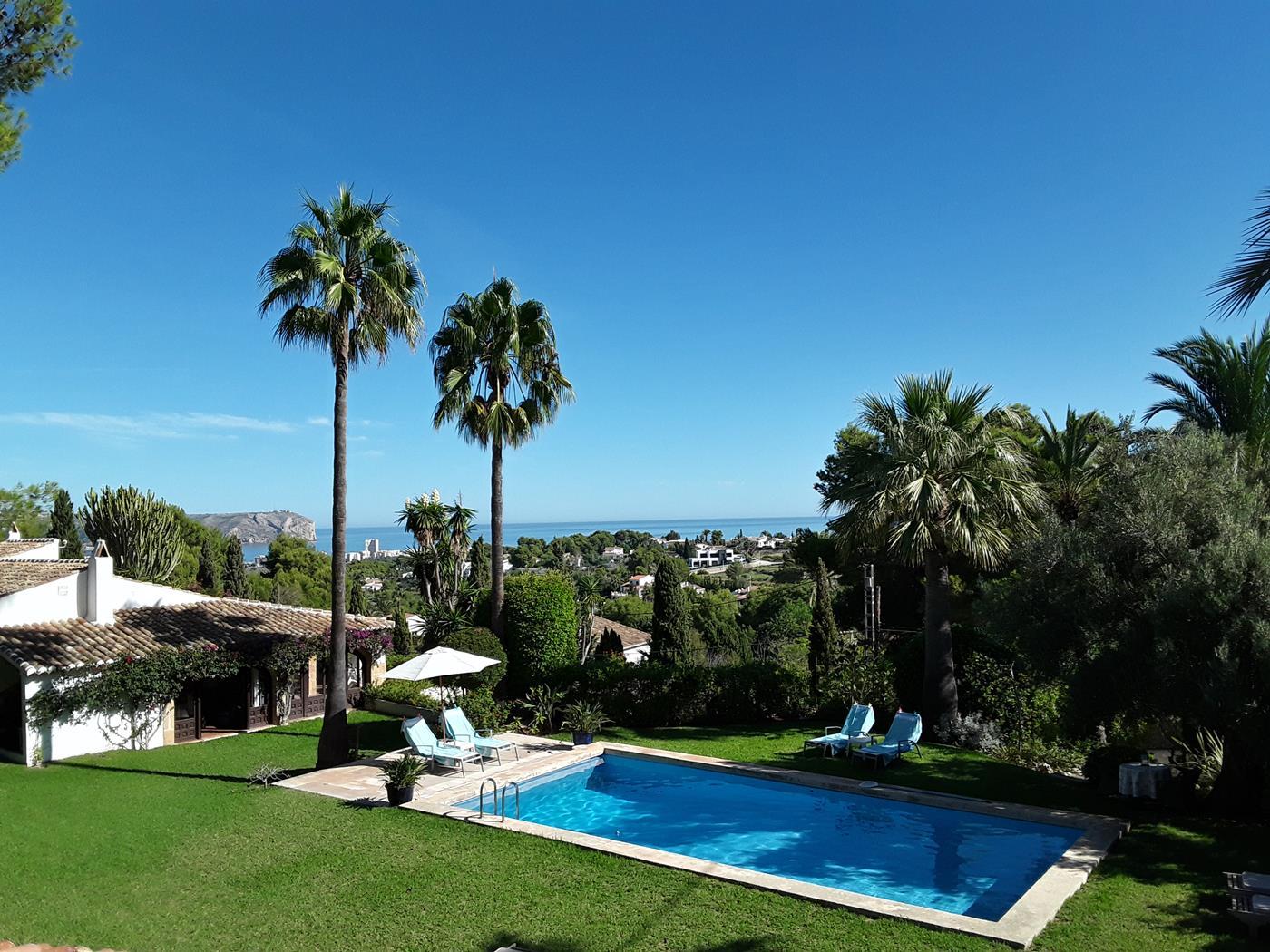 This large Mediterranean style villa offers a privileged living environment with sea views, tranquility and privacy. Garage and parking for several vehicles. Heating. Large closets in the bedrooms. Next to the pool and private garden you will find a guest house and its large covered terrace overlooking the sea.

On one floor, access in the house by a large covered terrace, has a lobby, a large living / dining room with fireplace and an access on a large closed terrace glazed with leaves overlooking the sea. A spite. Independent and fully equipped kitchen. 3 bedrooms. 3 bathrooms. The large master bedroom consists of a fireplace, living room with direct access in the pool area and beautiful wellkept garden. 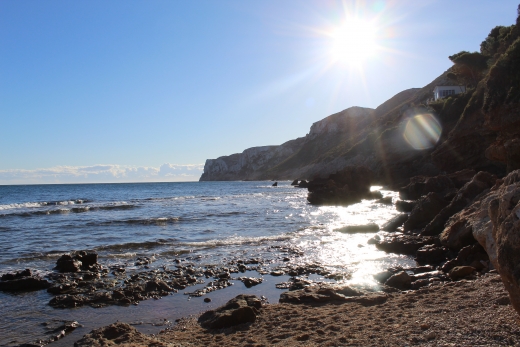 Beautiful views to the maren this spectacular chalet in the first line, located in Las Rotas. It has three wonderful terraces facing the sea, one with barbecue and outdoor dining, surrounded by garden. Also the living room, spacious, comfortable and with fireplace, has beautiful windows overlooking the sea. On the main floor there is the house with four bedrooms, the master en suite and three more, and another bathroom. In addition the house has two bedrooms with bathroom on the ground floor, especially designed for guests, as well as a storage room and a laundry room. To highlight the kitchen, spacious and comfortable, and fully equipped. It has air conditioning, parking area for several cars and a fantastic jacuzzi. It is sold fully furnished and equipped. 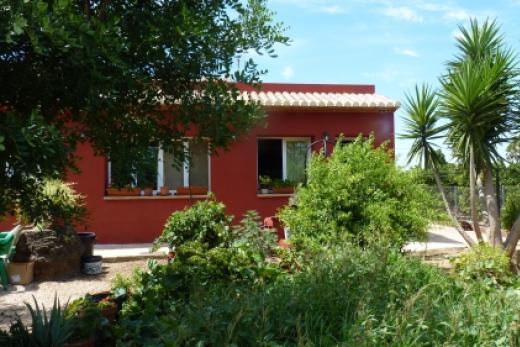 Finca in a quiet environment with a land of 1...

* Charming house in quiet location with large grounds, just 5 minutes' drive from Denia. The house (recently reformed and in excellent condition) has 3 bedrooms on the lower floor (200 sqm approx) and offers on the top floor (100 sqm approx) the possibility of living space extension.The interior benefits from a spacious and clean room-layout, in which the space can be well used: The main bedroom has an en suite bathroom and walk-in closet. The open kitchen has a storage room.The spacious rooms provide residential comfort amidst held Mediterranean nature: the plot (approx. 16,000 square meter) are fenced approximately 2,000 square meter. Here you will find next to typical Spanish plants avocado-trees, lemon-trees and persimmon-trees. The site offers the opportunity to be used as a playground for children, a space for pets or simply to be used only for relaxation.The entrance to the finca is on the Las Marinas, at km 5 approx. To Denia is a 10 minute drive, the new hospital in Denia, Las Marinas and the shopping center is located in close proximity (10 minute ride). The house offers an ideal starting point for day trips to Denia and it was walking on or around the Montgo, or relaxing walks on the beach (about 10 minutes away from the farm). The variety of recreational activities in the region can be fully exploited from here: no matter whether sports activities like golf (Golf Club Las Sella and Oliva Nova Golf Club are both about 10 minutes drive away), numerous riding stables, tennis courts, sailing and yacht clubs, to bicycle tours or jogging trails offer a variety of physical education and recreation. 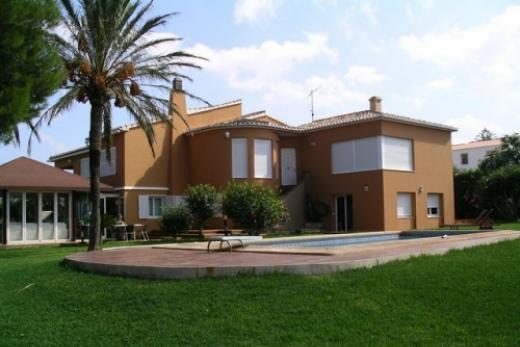 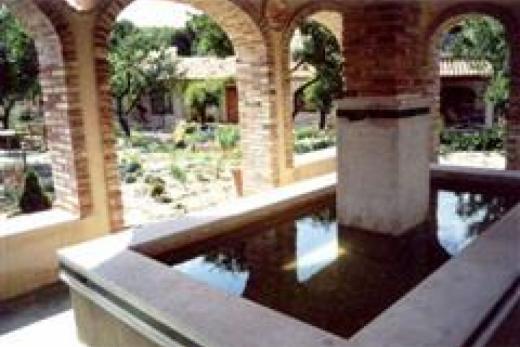 was originally the site of an ancient 12th-century Almohad settlement, which included a defensive tower (recently classified as an Object of Cultural Interest), erected on an outcrop of rock that was easy to defend and affording a view of the neighbouring fortresses: the castles of Atzabaras, Pop, Orba and Denia, with the coast beyond; on a clear day the island of Ibiza is visible. Alongside this tower the 17th-century Mallorcan settlers built the farmstead now known as La Casota, to which a number of auxiliary constructions were added over the course of time: the "Riu-Rau" or typical arcade-fronted building for drying raisins; the "Casa de la Era" or Threshing-Floor House; the "Estufa" or Stove, where the raisin-drying process was continued on rainy days. The whole complex has been restored and refurbished for the use of guests as follows:The Riu-RauAn old porticoed construction originally designed for storing raisins overnight, refurbished and divided into four separate double rooms each with individual access to the garden.Each room has a full en-suite bathroom, air conditioning and heating, hair dryer, TV if required, pure cotton linen, etc.The Casa de la Era has two reception rooms, one with a fireplace and the other -originally the stable- converted into a sitting-room and bodega with wood-burning stove. It also boasts a small library and the dining-room with magnificent sea views.The EstufaRefurbished as a separate two-storey house, it has a fully equipped kitchen, a sitting-room with a wood-burning stove, a Moorish oven and barbecue outside, TV, etc. (capacity for 6 to 10 people).The Estudio de la TorreBuilt close to the Almohad tower, this studio-apartment has a double bedroom, a full bathroom, a sitting/dining-room with a wood burning stove and sofa bed, a kitchenette and a veranda.Communal areasGuests may enjoy the garden, with magnificent sea and mountain views, and the porticoed fountain-washhouse with goldfish.Meeting room with a capacity for 18 peopleTherapeutic swimming pool with solarium overlooking the sea.In addition, the house is surrounded by land devoted to ecological agriculture: almond trees, cherry trees, olive trees, carob trees, vegetable gardens, chicken runs, etc.Wifi area There are a number of restaurants within less than ten minutes' walk from the house, while in addition the area offers plenty of opportunities to sample the excellent local cuisine, including a wide variety of rice dishes. 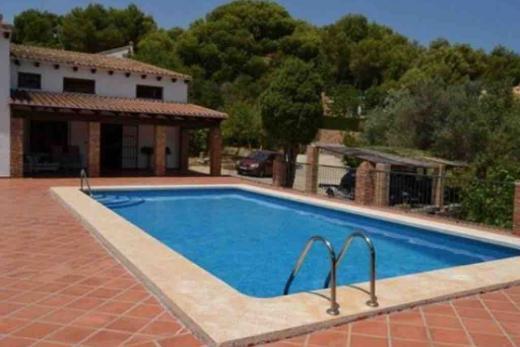 Beautiful villa in the green area of ​​Montgo...

Villa for sale in Denia, in a privileged area. The property has an area of ​​600 m2 while the plot covers 3,000 m2. The house is located on the ground floor and has 8 bedrooms and 3 bathrooms. The building has a swimming pool and garden. It is located in the Florida sector of the Montgó area of ​​Denia. It also includes two plots that adjoin the main one, one of 608m2, and another of 998m2, in both you could build. The city of Denia is located in a bay or It is a natural port at the foot of the Montgó and has a coastline of 20 km where the beaches of the north are wide and sandy and those of the south are rocky coves. It has two beach areas: Las Marinas and Las Rotas.One of the most attractive elements of Denia, is its Castle, since it is configured as an emblematic heritage. The castle is located higher than the city of Denia but in its urban core, and its slopes have been covered with houses, thus spreading the limits of the castle with the city. The climate of Denia is especially mild and placid, with an average 18ºC annual The winters are short and mild, and the summers are long and warm. Thanks to these mild temperatures are ideal conditions for the enjoyment of water sports or recreation in a frame of countless beauty. Denia has two marinas Marina el Portet Denia and Marina de Denia, which have more than 800 moorings between them. You can also find a lot of schools and companies that will help you have a great time with surfing, sailing, canoeing, scuba diving and all the activities you always wanted to practice. In addition, Denia is part of the select group of cities named Ciudad Creativa de the Gastronomy of UNESCO. Rice, fish and seafood, especially the well-known and popular boiled red shrimp. Mistela and raisins are the basis of an excellent cuisine, to which we must add citrus. 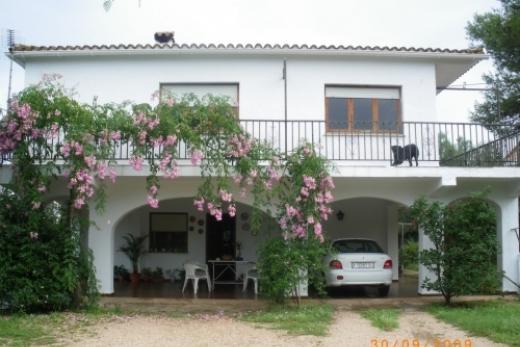 Finca with large plot crca from the beach 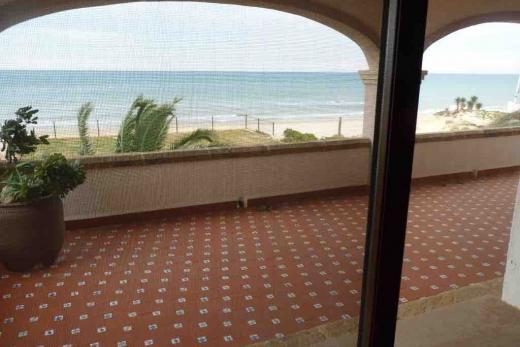 Large villa on the first line of the beach wi...

Excellent location, first line of beach, villa with flat and large plot and large dimensions a few meters from the sand. It also has two houses. Nice views of the sea It consists of 8 bedrooms, 2 living rooms, 2 bathrooms, 2 independent kitchens, terraces with open views to the sea and the mountains.